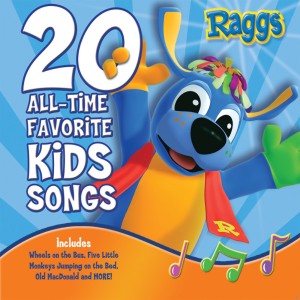 “Wheels on the Bus”

Emmy Awarding-winning “Raggs” sings “Wheels on the Bus,” “Old MacDonald,” “Five Little Monkeys Jumping on the Bed” and more for iTunes, YouTube and other media libraries.

(JULY 20, 2015 – CHARLOTTE, NORTH CAROLINA) — The five pups from the Emmy Award-winning “Raggs” TV series announce the July 20 release of their new album, Raggs 20 All-time Favorite Kids Songs, which includes rockin’ new arrangements of classics such as “Wheels on the Bus,” “Old MacDonald,” and “Five Little Monkeys Jumping on the Bed.” The album is available on iTunes starting July 20, 2015, will be available on other popular digital music outlets, for streaming on Sirius Radio and Time Warner’s Music Choice channels and at retail outlets by early fall.

Over the past few months, the companion videos have been released weekly on the RaggsTV channel on YouTube where they have garnered over 5 million views and are a “Recommended Pick” on the YouTube Kids App. The new Raggs 20 All-time Favorite Kids Songs videos will also be included in upcoming episodes of the “Raggs” TV series.

“It was fun to have the Raggs Band back in the studio and to record new, fresh renditions of these classic songs,” Fred Story, head of “Raggs”’ music team and founder of Concentrix Music and Sound Design in Charlotte NC, commented. “The original cast also reprised their roles in clever cameo intros to each song. The whole album rocks in true Raggs fashion!” Fred Story and Michael McGinnis, also a key “Raggs” team member at Concentrix, arranged the new songs and produced the music sessions. The songs are all public domain songs and no writer credits are known.

While the “Raggs” TV series already includes over 200 original songs, the team at Blue Socks Media, owners of the “Raggs” brand, felt the demand for these songs from their online and live show fans. The new songs will also be incorporated into the “Play at Palladium with Raggs” program at the Grand Palladium Resorts in Punta Cana, DR; Montego Bay, Jamaica; Riviera Maya and Puerto Vallarta, Mexico; and most recently Salvador, Brazil, where the “Raggs” characters perform live shows and host events.

“Raggs” can be found daily on Qubo cable TV in English, on Telemundo in Spanish, at Raggs.com and RaggsTV on YouTube.

1. Wheels on the Bus

9. London Bridge is Falling Down

20. Ring Around the Rosie

“Raggs” is an Emmy Award-winning, musical preschool television series about five colorful pups who learn life lessons in a cool clubhouse though the innovative mix of live action stories, music videos, concerts, cartoons and interviews with real kids. Originally produced in Sydney, Australia, with supplemental U.S. production, “Raggs” is available in Australian English, U.S. English and Spanish. “Raggs”’ expansive library includes 195 finished half hour episodes, 200 original songs, over 1,000 segments and the recent production (2015) of 20 classic songs with companion animated cartoons. The entertaining and educational series is based on the original characters created by Toni Steedman, a Charlotte, NC, advertising executive, for her then six‐year‐old daughter Alison. “Raggs” is an international brand including TV distribution, multi-platform digital distribution, CDs, DVDs, toys, books and touring. With over 4,000 live performances around the world, The Raggs Band’s live event experience has expanded to include a long-term partnership called “Play at Palladium with Raggs” with the Palladium Hotel Group at their resorts in Mexico and the Caribbean. “Raggs” and all rights are owned by Blue Socks Media LLC, Charlotte, NC, USA. For more info, go to www.raggs.com.